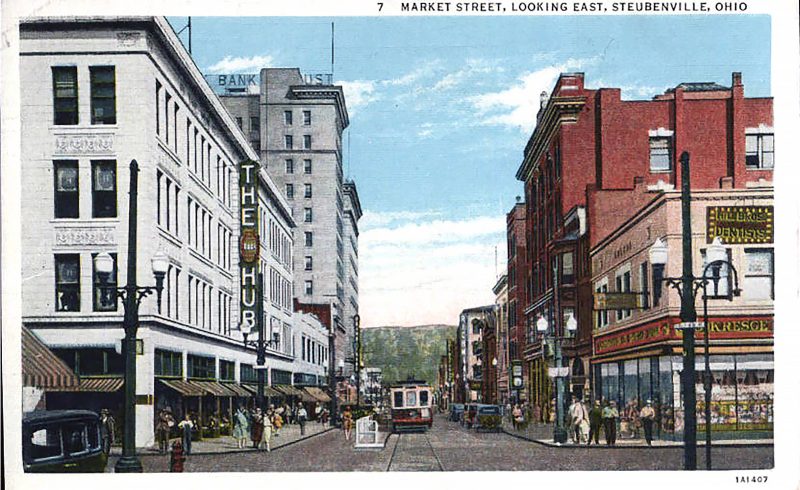 (EDITOR’S NOTE: As part of the Academy of Lifelong Learning’s Fall Courses for Area Seniors, Alan Hall, retired director of the Steubenville and Jefferson Counties Public Library, held a class on a popular and patronized business that is now fondly remembered that was an important part of downtown Steubenville – The Hub. For many current and former residents of the area, shopping at the Hub has been a special experience during vacation or any time of the year. In today’s Valley Life, Hall shares some of the hub highlights from its Class.)

The later half of the 19th century saw the development of local department stores in American cities, usually named after the person or family who took over a business and expanded with other smaller stores or departments to create a shopping event.

In Steubenville, this local department store had its roots on April 9, 1904 on the corner of Fifth Street and Market Street, where the Towers now stand, when two brothers named Simon J. Anathan and Mone Anathan borrowed money from Philadelphia merchants to buy the Anathan Brothers Establishing Inc. better known as simply The Hub.

They stocked the store with men’s clothing and men’s outfits and offered their wares to Steubenville. Two years later, two younger brothers, Eugene and Louis, joined them in their new business. At that time, the Anathans lived like other traders in the city center on the upper floors of the building.

The hub was so successful that in 1909 they moved the store to the opposite northwest corner to a three-story commercial building, where the four brothers and two other employees did business. By 1916, the brothers bought the Johnson Block building next door and expanded their inventory by opening additional departments. The shop was open five days a week from 8 a.m. to 6 p.m. and on Saturdays until 11 p.m. – at that time it was customary to entertain farmers.

Her brother-in-law, Martin Bayersdorfer, entered the business in 1918, but plans to renovate and expand the building were delayed with the First World War.

The two youngest brothers died in the 1920s, but the next generation of Anathan family members were added to the team in the 1930s. With the demand, new departments were added; other departments disappeared over time. A multi-storey warehouse was built in the stern. City bus routes stopped just outside the store, and customers from all over east Ohio came to The Hub for a shopping mecca. The 1930s and Depression were tough for The Hub, and they had to expand services to make the business attractive to buyers with minimal funds. In 1938, a credit department was set up to assist customers with shopping at The Hub.

After World War II, America’s department stores were booming, and The Hub had moved into the next generation of Anathan family members. In the late 1940s, the business was greatly improved and in 1954 the entire building was air-conditioned. In the 1950s, the entire store was renovated, including the changing rooms and lounges, the beauty salon, the bridal shop, the maternity shop, the small shop for children, the hat making, and the men’s and women’s shoe department.

In 1960, a new entrance on Fifth Street joined the main entrance on Market Street as more and more customers arrived by car. The Tea Room restaurant on the mezzanine floor has been rebuilt and renovated several times.

In the 1960s, The Hub had 325 employees and was open 9 am to 5 pm, 6 days a week, until 9 pm on Mondays and Thursdays with extended hours between Thanksgiving and Christmas. But it was never open on Sunday.

The store had expanded so much that it closed in 1955 “The center of Steubenville Inc.” as a way to manage big business.

But times were changing, and with the advent of larger local stores that were open seven days a week, The Hub’s business model had to change. Unlike West Virginia and Pennsylvania, Ohio didn’t have one “Blue laws” prevents shops from opening on Sundays. The concept of shopping centers and malls with ample free parking had an impact on The Hub.

In 1978 the name of The Hub in the Steubenville store was changed to “LS Gut & Co.” although local customers have generally not followed the renaming.

The Steubenville business had half the workforce at its height in the 1960s, and on May 27, 1980, LS Good & Co. filed corporate reorganization and bankruptcy petitions under Chapter 11 of the Federal Bankruptcy Act.

The William F. Gable store in Altoona would be closed immediately to stem the tide of financial bleeding from the company.

In barely two months, the reality emerged that LS Good & Co. was in dire financial straits and was demanding that all stores be closed and liquidated except the one in downtown Wheeling and the Ohio Valley Mall in St. Clairsville .

In late July 1980, testimonies showed that the downturn had started in 1976 and by 1980 huge debts had been amassed to various banks, credit departments and leasing companies.

In the past few days, almost everything in the building that was not owned by a leasing company has been sold for the debt, and the building and land have been sold more than once to potential businesses. Eventually the complex was demolished in 1993.

The Hub’s proud staff members had meetings for several years after the closure, and the Steubenville and Jefferson Counties Public Library was the proud recipient of scrapbooks created by longtime associate Gladys Edwards Davison (1904-2007) who worked for The Hub worked, led for 48 years. These scrapbooks were revised and the library’s local history department researched and added information to them. They are digitized and accessible to everyone online.

The same story can be told across America, where memories of shopping at the local department store abound, especially vacation stories in many “Toy land” in these stores.

The last locally owned department store in the United States appears to be going to the Freedlanders department store in Wooster. David Freedlander opened his shop in 1884 and was run by Herman and Herald, his descendants, until 1999. Stanley Gault, the Wooster native, owner of Rubbermaid and Goodyear, had wonderful memories of the store and bought it as it felt like a great local department store could do well. In 2008, he said the store would no longer operate, would close after the Christmas season and then demolish.

Like so many of these local department stores, the building was repeatedly renovated and expanded and was no longer active.

As many of you know, I’m from Marietta and have fond memories of going to Bonhams Department Store with my grandmother, another shop that was taken over by LS Good & Co. My grandmother Maggie still called it Turner-Ebinger’s first name, and I remember taking her hand and taking the elevator as a little kid. She would roam the store looking for the right item, stopping at the mezzanine restaurant for a treat, or enjoying the shop displays for all the wonderful things to buy.

I don’t think looking at a computer screen and picking up something on your porch will replace that time with Grandma.

Get the latest news and more in your inbox

A Forward Looking Tarot Reading for 2022