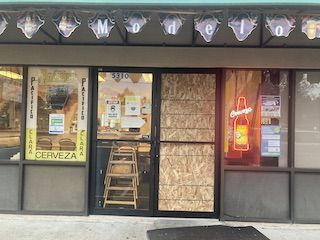 Crime in Tacoma is still out of control

For more than 25 years, Vuelve a la Vida has enjoyed brisk business as one of Tacoma’s premier authentic Mexican restaurants. The staff there is like family and it’s a favorite place for neighbors to go for a walk or take a short drive for a bite to eat. Now, thieves have repeatedly targeted this Pacific Avenue anchor store, along with other nearby stores, to the point that Vuelve a la Vida owner Juanita (last name not known) is in tears over it.

“It’s not easy right now, that’s for sure,” she said. “I know people who leave here because it’s so bad. They said they were tired. How many small businesses have to close and move?”

Numerous Tacoma cannabis stores have been singled out for armed robberies this month: Local Roots, Mary Mart, two Zips locations and House of Cannabis were robbed at gunpoint on February 14th. Two employees were attacked, one punched in the ribs and pushed into a cupboard, and one hit him in the back of the head with a pistol.

“Guns weren’t drawn until they went through the door – two nine-millimeters, one with an extended magazine,” said House of Cannabis owner Kevin Heiderich.

At Vuelve a la Vida, criminals broke windows and stole valuables including food and beer from the cooler on three separate occasions, most recently late last month. Juanita walked in to find her restaurant ransacked, glass everywhere, and her point-of-sale (POS) machine broken on the floor.

“They would have taken the entire POS if it hadn’t fallen to the ground and been damaged,” she said.

Her restaurant’s glass doors keep breaking so she can’t afford to keep replacing them, and replacing the stolen food is another financial drain. Now her customers see plywood where there used to be a window, a common sight in businesses across Tacoma these days.

“I can put it back, but if it breaks, I have to pay for it again. I’m fed up,” she said. She would like to report it to her insurance company, but too many claims could get her insurance canceled.

Businesses near Vuelve a la Vida, including Walgreens and Wells Fargo Bank, were also hit. Boost Mobile alongside Vuelve a la Vida was held up at gunpoint on January 22nd.

Street racing is another problem on this stretch of Pacific Avenue, with organized groups of cars blocking the street late at night to make donuts there and in parking lots.

Anita’s Interiors owner Al Holloway faces the same realities. His shop is on Pacific Avenue, less than two miles from Vuelve a la Vida. It and houses that belong to him nearby are a frequent target of burglaries and vandalism.

“They stole lawn mowers from people’s houses, grills, they broke in when people went to work…” Holloway said of his neighbors, also describing damage to his own property. “They kicked the sliding glass door and threw a rock through the glass. I haven’t fixed it yet because if I do, they’ll just do it again.”

Holloway is trying to sell the homes, but he said investors are encountering menacing squatters when they enter the premises.

“They go in and there are all these people in there who are threatening them and saying it’s their house. It was just an ugly situation. The police don’t even respond when one of my houses is broken into. Nobody cares about your own,” he said.


Holloway recounted more tense situations he faced. “Twice I’ve had people in this store who wanted to stop me for money. We never had that kind of problem until the last six or eight months.”

Juanita and Holloway attribute these crime sprees to two things: longstanding homeless camps near their businesses and the police, who no longer have the same authority they once did. Last year, state legislatures revised police accountability laws, including allowing individual officers to be sued for performing their duties. Law enforcement officials are still unsure of what these new laws require of them, creating confusion among officials about what they can and cannot do. Tacoma’s reduced police force is another issue when it comes to having enough officers to respond to 911 calls.

“I understand the point of view of the police. They’re handcuffed,” Holloway said.

Dammeier and the Council are asking the Pierce County Legislative Delegation to approve revisions to the state statute at cclearly and concisely define “physical power”; permit pursuit by vehicles if it is no more dangerous than the offense for which the vehicle is being pursued; to expressly authorize pre-trial detention where there is reasonable suspicion; and to permit the use of force when a law enforcement officer has reasonable grounds to suspect that a person possesses a firearm or is a dangerous weapon.

Dammeier wants the council to fund a $10,000 retention incentive for county deputies. He has also enlisted the support of the district attorney and the sheriff for the creation of a civilian review board.This ensures a timely, thorough, and objective review of complaints alleging improper use of force or allegations of serious misconduct by employees of the Pierce County Sheriff’s Department.

In Tacoma, Mayor Victoria Woodards unveiled a package of business support initiatives for which the City Council has approved $650,000 Funding from the American Rescue Plan Act. To increase security and help businesses repair damage caused by criminal activity, $300,000 is earmarked for window repairs, $250,000 for window repairs private security in some business districts. An additional $100,000 will provide incentives for companies to voluntarily require customers to provide vaccination records. An additional $2,790,000 of the package will be invested in additional emergency shelters for the homeless.

Details on the implementation of these initiatives are currently being worked out. The city also continues to work with the Tacoma Police Department and incoming Police Commissioner Avery Moore on additional long-term crime-fighting strategies and solutions.

According to the City of Tacoma, $3.3 million has been distributed to 236 businesses across Tacoma from 1,390 applications through 2021 in response to the pandemic. Funding can be used for a variety of purposes related to business operations, including payroll and capital expenditures. An additional $2.5 million is in the funding process for approximately 176 small companies out of 454 that applied. Overall, the city funding is expected to benefit 52% of BIPOC-owned businesses and includes businesses from all boroughs across the city.

Issues with Tacoma’s homeless encampments are being addressed in the form of two recent evictions, one under I-705 and the other along I Street in southeast Tacoma. It remains to be seen whether the clean-up efforts will lead to a reduction in crime and vandalism in these areas. At Camp 705, few residents took up the city’s offer of housing and services. The rest fled to other neighborhoods like “The Jungle” below I-5, a long-standing campground for homeless people that stretches from downtown Tacoma to 72nd and I streets.

Tacoma resident Virginia Basher volunteers her time working with the homeless as an independent citizen who just wants to help. She said when she was there last week there were about 100 residents in the jungle, but that’s about to change.

“They all told me it would fill up quickly because of the sweeps they had,” she said. “On I Street, I don’t know where everyone went. They’re just scattered everywhere.”