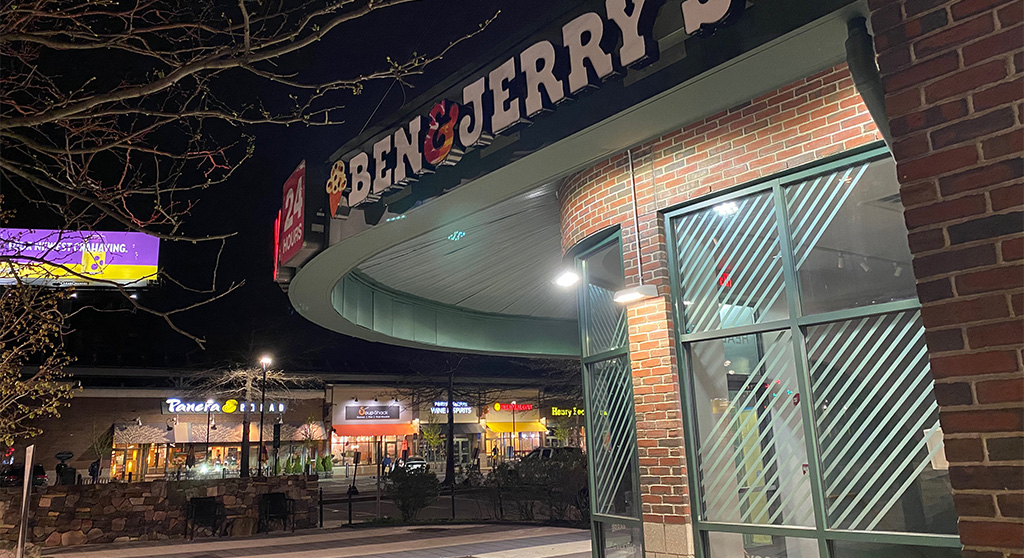 Porter Square Shopping Center was sold by Gravestar, one of nine locations in a $390 million deal

Aside from a yet-to-open Ben & Jerry’s, Porter Square Shopping Center‘s storefronts are packed as it’s being sold in a $390 million deal. (Photo: Marc Levy)

The Porter Square Shopping Center, owned by Gravestar since its inception in 1994, was packaged along with eight other properties and sold to Boston-based TA Realty for $390 million. TA Realty’s partner was Wilder, also from Boston, who operates retail properties from Maine to Florida and Illinois. The next property is the Arsenal Yards shopping center in Watertown.

The 175,687-square-foot Porter Square Shopping Center is home to a Star Market and CVS and other retail outlets, as well as a few chain restaurants like Panera Bread and Halal Bros. — but also locally owned loyal brands of Tags Hardware and Porter Square Books.

The deal was announced on Thursday on broker Newmark’s website, which said it totals 729,437 square feet for “nine prime malls” in the greater Boston and Providence areas: In addition to Porter Square, these are Brookline Plaza, Norwood Plaza, Sudbury Plaza, Waltham Plaza, Wellesley Plaza, Auburndale Plaza in Newton, Horn Pond Plaza in Woburn and Pontiac Avenue Plaza in Cranston, Rhode Island. All are anchored by grocery stores, Bisnow noted in a Thursday article.

“This portfolio represented an opportunity for a generation – the first to offer the highest quality collection of privately owned shopping centers in New England,” said Newmark Vice Chairman Geoffrey Millerd in a press release.

That leaves Gravestar with The Greenworks Building, a former rubber factory and warehouse that now comprises 25,000 square feet of office space at 160 Second St., East Cambridge.

Although there have been long vacancies in Porter Square Shopping Center storefronts in recent years, such as B. a Zoots dry-cleaner that closed in February 2018 and filled a Soup Shack ramen shop in the summer of 2020. But the center is now full, with a Ben & Jerry’s opening where an Emack & Bolio ice cream parlor closed in August 2020.