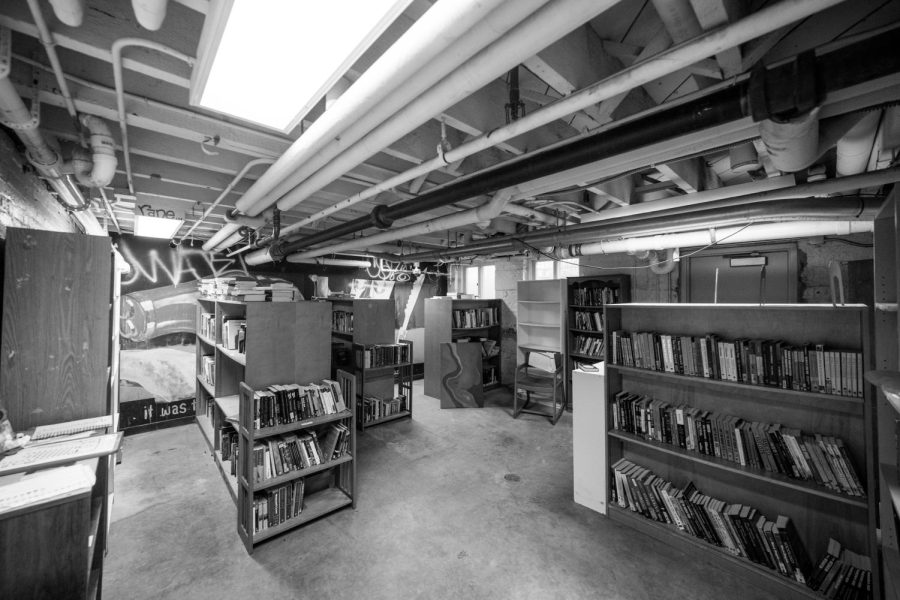 Before the pandemic, the SWAP book cooperative, a cozy little library in the basement of Harkness House, provided textbooks to students in exchange for their old books or labor. Students could go to the co-op at any time during work hours to browse the student-created shelves of books labeled with different-colored sticky notes, or they could search the co-op’s online database for specific books. Now, after a hiatus of more than two years and a move to the basement of Tank Hall, SWAP is open again. Although some of the systems and catalogs are not yet fully operational again, the goal of the cooperative is the same: to make textbooks available to students free of charge.

SWAP was originally founded in 2013 by a group of students in an ExCo called Co-ops and Cooperation. One of the students, Jackson Kusiak, OC ’15, noticed accessibility issues that many students face with books and suggested starting a book-sharing co-op. One of Kusiak’s friends, Pablo Cerdera, OC ’15, liked the idea.

“[Kusiak] proposed it abstractly,” Cerdera said. “Not to deserve too much credit, but I was like, ‘Why don’t we just do it?'”

From there, the SWAP book cooperative started. It started in a spare room in Harkness House, then expanded into the basement as the group gathered more books and more support.

SWAP addressed textbook accessibility issues that many students faced years before its inception. The core concept of recycling and sharing books appealed to many students.

“It seems so silly that students would keep buying new copies of books – and probably still do – and then do what with them?” said former SWAP organizer Natalie Hartog, OC ’17. “If it’s the same book that’s used in class from semester to semester, it just makes more sense to share.”

SWAP’s founders knew from the start that they didn’t want the cooperative to cost students.

“It was important to me that it was completely cashless,” Cerdera said. “We wanted to make sure people could get the books they need without paying for them.”

Instead of using money, the cooperative worked with a points system. The students could collect points by volunteering in the cooperative or by donating old books. Freshmen could earn a certain number of credits toward their textbooks at the beginning of the year, with the proviso that they would get them back throughout the semester.

Early on, SWAP called for textbooks on how to build an inventory and received a surprising response.

“The community response has been great,” said Joe Martin, OC ’16, another founding member of SWAP. “Tons of people were so excited about this, we had so many textbooks and we had to find new ways to store them.”

Molly Copeland, OC ’15, was also heavily involved in SWAP when it started. She said the cooperative received so many books that they ended up with a shopping cart full of extra books for over a year.

While the emergence of SWAP felt like a new solution to an old problem, it wasn’t the first book co-op to serve the Oberlin community. The Co-op Bookstore, which closed in 1999 for financial reasons, was a popular co-op store in the ’80s and ’90s. The bookstore was part of a larger system of cooperative businesses called The Oberlin Consumers Cooperative. The OCC operated extensively from the early 1940s to the late 1990s. It included a wide range of businesses, including grocery stores, laundromat, clothing stores, a bus ticket agency, a credit union, and a restaurant.

“We did a lot of research into what the old book co-op looked like and how [it] operated, and we ended up going in a completely different direction,” said Cerdera. “[In] the old cooperative, … people still used cash to buy stuff. It was like a collective purchasing cooperative and we didn’t think that was exactly what we needed.”

Today, Remy Gajewski is a third-year college rebuilding SWAP, and the co-operative is still in the process of returning to full capacity following its move and two-year hiatus. Gajewski’s end goal is to restore many of the old systems and rules with minor changes, but for now they are working on organizing all the books and setting up the new room.

“We don’t currently have the infrastructure to really implement the point system,” said Gajewski. “We just took what you need, give what you can.”

By the fall, Gajewski hopes to have more volunteers and greater student participation in the cooperative.

“Also, SWAP really depends on the students participating and being a part of it to work,” Gajewski said. “The more people who are there, know about it and participate, the better it can go.”

The sense of community engagement and collaborative effort associated with SWAP is something all the alumni loved to talk about.

“One of the things I loved about SWAP was the community and getting to know these people,” said Martin.

Copeland shared a similar sentiment, adding that the group wanted the space to have a certain vibe as well.

“I think there was a special magic in the group that just wore it,” Copeland said. “We really wanted people to come in and just hang out. … We were really hoping it would be a study room.”

Hartog agreed that the common room had a certain charm that she always enjoyed.

“It kind of felt like a really tiny library or a tiny cafe, which I liked,” Hartog said.

Gajewski spoke about building the cooperative to bring out many of those old feelings of collaboration and community. They are excited about the future of the cooperative and hope that it will be fully operational by the start of the fall semester.

“I think it’s a really amazing resource that these people have created and I really want it to thrive again,” Gajewski said. “I’m really excited to see how things continue now.”